Elegant, and a Bit Exotic, The Only Sporadically Occurring C. sowerbii Adds A Little Mystery and Delight to Michigan’s Waters 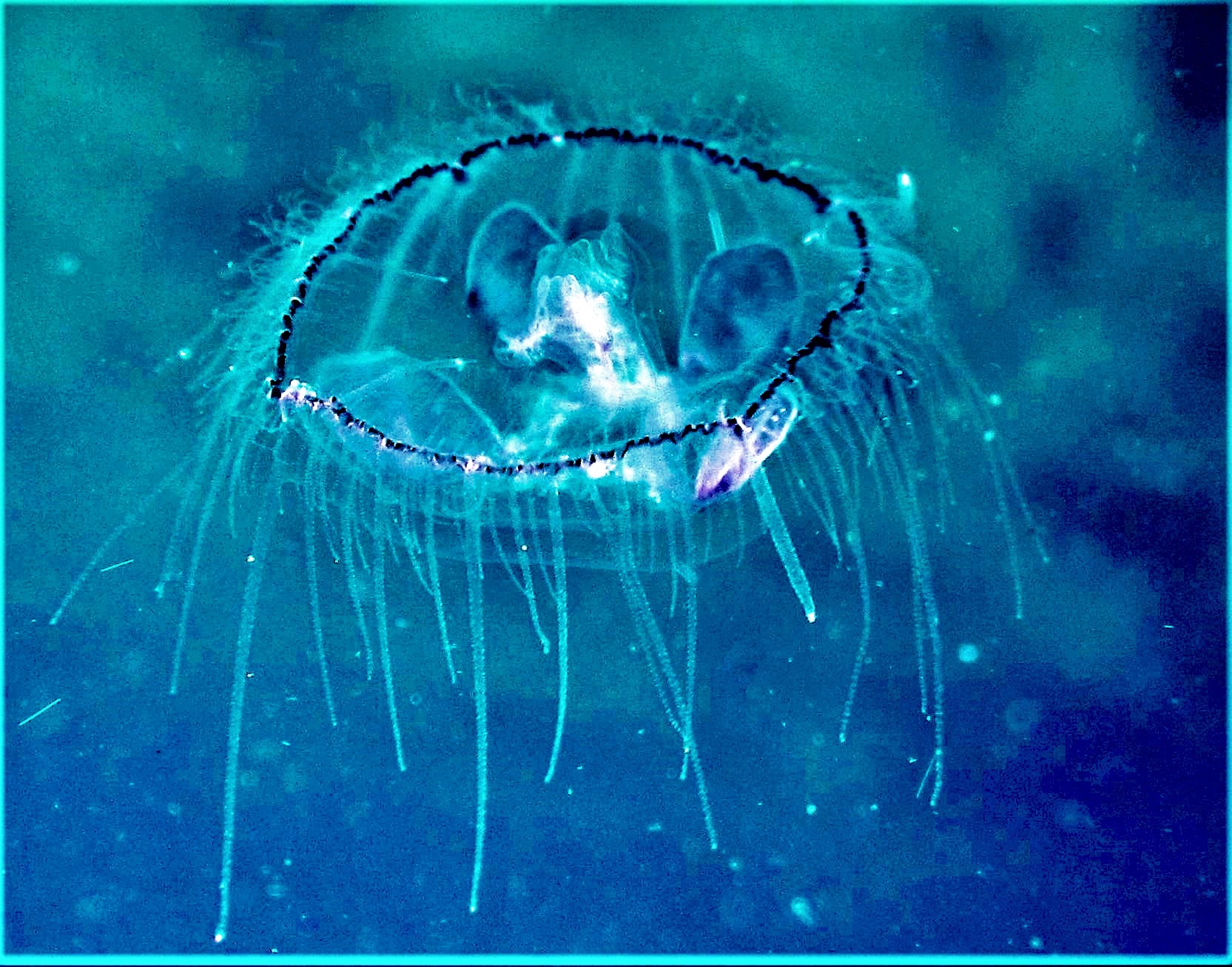 Story and Photos by Scott Brown, MWA Board Member

Evoking expressions of surprise and delight, the initial experience of observing an only sporadically occurring swarm of ancient undulating freshwater jellyfish gracefully propelling themselves through the late summer warm waters of your favorite lake always seems to be a joyful one. Commonly referred to as “peach blossom fish” in their native China, words such as fascinating, graceful, elegant, and mysterious are often deployed by authors in their attempt to aptly describe the exotic freshwater jellyfish species known as Craspedacusta sowerbii that occasionally appears in Michigan waters.

Representing an extremely delicate and highly elastic gelatinous creature that is intolerant of intense wave action and fast-moving waters, the freshwater jellyfish species known as C. sowerbii that inhabits Michigan waters is most often observed floating or gracefully swimming near the surface in ponds, reservoirs, quarries, the slow-moving backwaters of rivers, and quiet wind-sheltered areas of inland lakes. Lacking a brain, heart, respiratory system, skeleton, and even blood, the relatively simple, delicate anatomy of C. sowerbii is comprised of a translucent bell-shaped outer layer known as the epidermis; a middle layer consisting of a thick, highly elastic, grayish-blue in color gelatinous substance that is referred to as the mesoglea; and, representing a simple digestive system that acts as both a stomach and intestine with just one opening that serves as both mouth and anus, an inner layer that is referred to as the gastrodermis which includes a crude stomach-like structure that is referred to as the manubrium. Circulation of nutrients within the ancient organism is facilitated by the existence of four radial canals that originate along the edges of the manubrium.

Freshwater jellyfish are known to possess a sense of smell, are able to detect light, and are capable of sensing and responding to near-by stimuli such as motion due to the existence of an elementary network of nerve cells that are widely distributed throughout their gelatinous body. The rim of their translucent bell-shaped epidermis is adorned with up to 400 relatively long tentacles that each possess thousands specialized cells called cnidocytes that are deployed by the organism to capture and pass prey consisting of tiny zooplankton to the opening of their gastrodermis. Drifting in the water column with its tentacles fully extended, jellyfish waits for suitable prey such as a tiny daphnia to come into contact with a tentacle. Once contact is made, nematocyst cells within the tentacle fire into the prey, injecting a tiny quantity of a powerful toxin that acts to paralyzes the animal, with the tentacle then acting to secure the prey by wrapping itself around the immobilized animal. It is important to note that stings by small freshwater jellyfish such as C. sowerbii produce only minor pain and often go unnoticed by swimmers due the miniscule amount of toxin that is injected as a result of contact with a tentacle. Mature C. sowerbii are capable of growing to a diameter of approximately 19 millimeters (penny-size), responding to the detection of stimuli such as near-by motion, however, the highly elastic gelatinous species is capable of instantaneously expanding its translucent epidermis to three times its normal diameter.

Beginning life as a tiny polyp attached to aquatic vegetation, rocks, or coarse woody debris, C. sowerbii and other species within the Cnidaria phylum possess a complex life cycle that allows them to expeditiously take advantage of the return of environmental conditions that are favorable to their survival and sustainability. In rare populations of C. sowerbii that possess both female and male individuals, the species is capable of achieving sustainability by alternating with each generation between reproducing sexually, with free floating sperm cells fertilizing eggs, and reproducing asexually by cloning themselves. Freshwater jellyfish are dimorphic, depending upon conditions, such as water temperature, the amount of light penetrating the surface, and/or food availability, freshwater jellyfish such as C. sowerbii are known to alternate between a polyp phase, a larval phase, and a relatively brief life in late summer as a sexually mature free-swimming male or female hydro-medusa. Freshwater jellyfish such as C. sowerbyi are known to spend much more time in existence as microscopic podocysts, frustules (larvae produced asexually by budding), planulae (larvae produced sexually by mature male and female hydromedusae), or as sessile polyps that attach themselves to stable submerged surfaces such as coarse woody debris and rocks. It is important to note that the vast majority of C. sowerbii colonies are comprised of all-male or all-female individuals, therefore rendering the species almost completely dependent upon asexual reproductive processes for long-term survival.

Intolerant of the cold-water temperatures that are present in northern temperate waters in late fall, winter, spring, and early summer, the most abundant colonies of mature hydro-medusa phase C. sowerbii are observed as late summer water temperatures reach their maximum in August and September. Most often observed floating or swimming near the surface on bright sunny days, the mature hydro-medusa phase of C. sowerbii comes to an end with the gradual emergence of cold-water temperatures. During the winter months when northern temperate water bodies are frozen over, C. sowerbii contracts and enters a long period of dormancy as resting bodies called podocysts. Once environmental conditions become favorable, they again enter the polyp phase that later in the summer leads to the formation of a mature hydro-medusa.