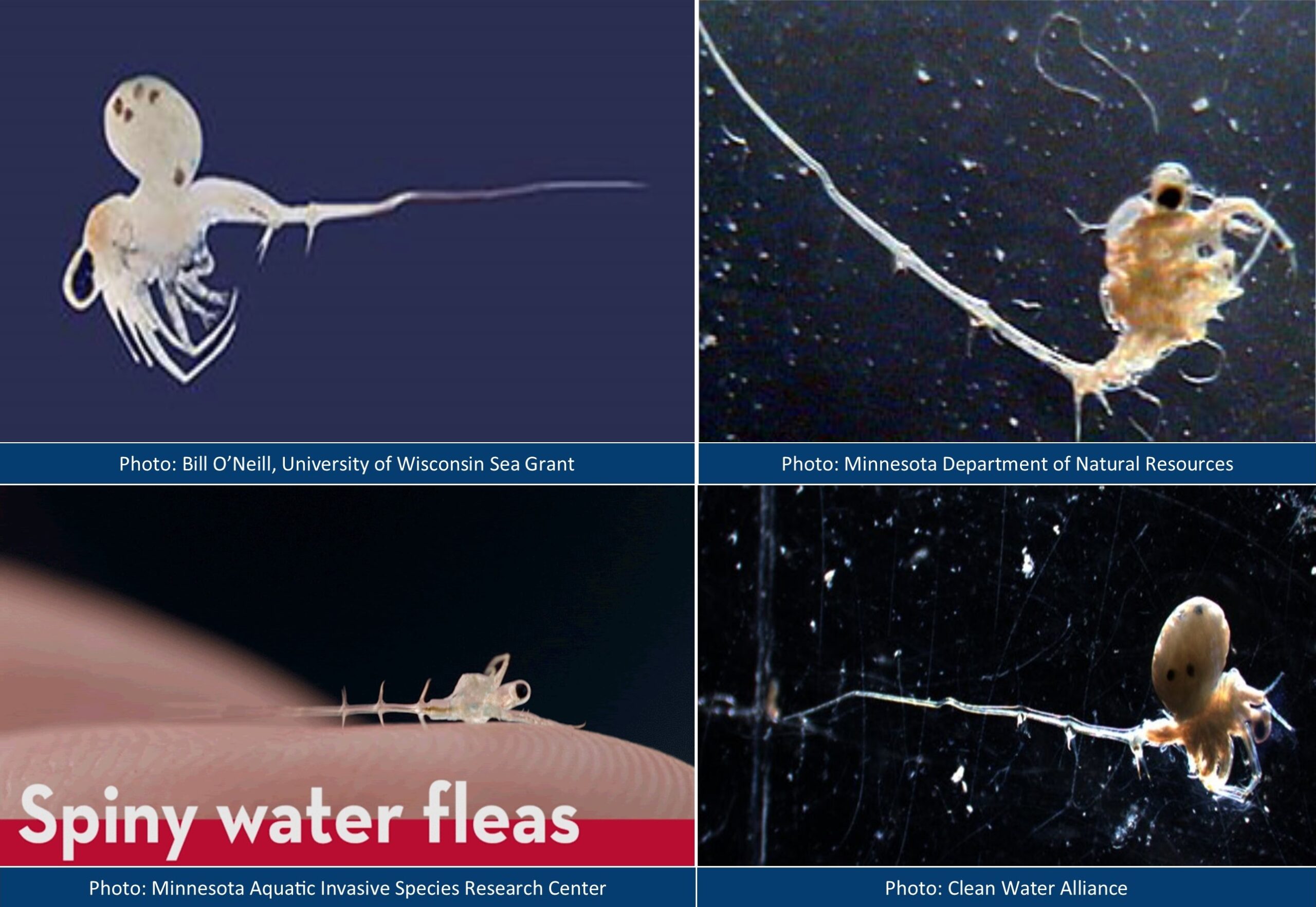 First observed in the waters of Lake Ontario in 1982, the exotic aquatic crustacean known as spiny water flea are a native of Europe and Asia that were first introduced to the freshwaters of North America via the discharge of contaminated ballast water emanating from a trans-oceanic cargo freighter that had entered the Laurentian Great Lakes through the St. Lawrence Seaway. Subsequently detected in Lake Huron in 1984, Lake Erie in 1985, Lake Michigan in 1986, and Lake Superior by 1987, spiny water flea began to appear in a steadily increasing number of inland lakes located throughout the region beginning in 1990. Large inland lakes in the region that now host abundant populations of spiny water flea include Lake George in upstate New York, Minnesota’s Lake in the Woods, the Madison Chain of Lakes located in Wisconsin, and Lake Michigamme, one of Michigan’s largest inland lakes, that is situated in the Upper Peninsula near Marquette.

Microscopic aquatic animals that are known as zooplankton, spiny water flea – scientific name Bythotrephes longimanus, are opaque in color, and are characterized by a single long tail that comprises 70% of their length that on average ranges from one-quarter inch (6 mm) to five-eighths inch (16 mm). The exotic invasive zooplankton species may also be identified by the presence of one to four barbs on their long tail, and by a head whose appearance is dominated by the presence of a large, single black eye. Capable of exponential population growth, and of rapidly establishing sustainable populations in newly invaded lakes, spiny water fleas have evolved to utilize both asexual and sexual means of reproduction. In warm summer waters, each adult spiny water flea is capable of asexually cloning up to 10 new individuals in as little as two weeks. Responding to the cooler waters of mid-to-late fall, male and female spiny water flea reproduce sexually, and produce large quantities of large, robust eggs that settle in lake sediments where they overwinter until the following spring in a dormant state. Spiny water fleas that are cloned, and/or that are hatched from eggs in response to the arrival of warm waters are capable of reaching maturity, and of reproducing within one week of the time they are born. It is important to note that part of the extraordinary ability of the exotic crustacean to successfully spread from lake-to-lake is enabled by the fact that the eggs of the species that are often eaten by minnows that are later captured by fisherman for use as bait, and then transported via trailered watercraft to a new lake are capable of surviving passage through the minnow’s gut, and of later hatching, representing the beginning of a new invasive population.

Preferring mesotrophic (moderately productive) and oligotrophic (low bio-productivity) inland lakes found in northern temperate regions of the earth, spiny water fleas regularly migrate from lower layers of the water column hosting deep, dark, dissolved oxygen starved waters to the well-lit, well oxygenated waters of the upper water column. Optimal water temperature for spiny water flea ranges from 14° – 23° C (57° – 73° F). Intolerant of water temperatures that exceed 26° C (78° F), temperature is known to play a major role in determining their sexual and asexual reproductive efficiency, and their overall abundance within in a given aquatic ecosystem. Preferring freshwater ecosystems, it is important to note that within their native geographic distribution range, spiny water flea are capable of tolerating the brackish water ecosystems that are often located near oceanic coastal areas.

The most significant ecological impact rendered by abundant populations of invasive spiny water flea are derived from the fact that the highly predatory crustacean preys heavily upon native zooplankton, including Daphnia, that represent a critical food source for native fish populations in most northern temperate inland lakes. The aggressively foraging invasive zooplankton species is capable of adversely affecting the growth and survival of young fish such as bluegill and yellow perch by reducing or eliminating native zooplankton species that form the “ground floor” of the aquatic food chain in many northern temperate inland lakes. Research indicates that spiny water fleas are responsible for consuming 1.5 to 5 times the quantity of native zooplankton than is consumed by juvenile yellow perch. This fact is particularly important in light of the fact that most native juvenile fish are incapable of preying upon the invasive zooplankton species due to their extraordinarily long, barbed tails. Abundant invasive spiny water flea populations are also capable of dramatically affecting inland lake ecosystems by reducing or eliminating native populations of native zooplankton species such as Daphnia magna, that in addition to representing an important native food source for juvenile fish, are also known to make important contributions to helping sustain clear water by aggressively foraging upon, and controlling the density of water clarity depriving single cell green algae species knows as phytoplankton.

Transported to new inland lakes by the 95% of recreational fisherman who tow their watercraft from lake-to-lake, spiny water flea attach their long barbed spines to all types of surfaces – including fishing lines, nets, and anchor ropes—and unless boats, trailers, and fishing gear are thoroughly cleaned between each trip by their owner/operators, transient watercraft are capable of carrying exotic invasive spiny water fleas and their eggs between lakes, infecting one lake after another with a highly aggressive invasive species. Due to their relatively small size, spiny water fleas are often very difficult to discern on an individual basis, and are usually detected by the presence of clusters of thousands of spiny water flea that appear as a “bristly glob of jelly with black spots” on monofilament fishing line.

The significant ecological threat posed by the highly invasive zooplankton species is emphasized by the fact that they are capable of exponential population growth, and possess the capacity to irrevocably alter the aquatic ecosystems they invade, and to ultimately diminish the recreational and economic value of affected inland lakes. Based upon their ability to severely disrupt native aquatic ecosystems, and upon the fact that lake managers currently possess no viable means of eradicating, or of even controlling the abundance of the aggressive crustacean, spiny water flea represent one of the most significant biological invaders to have thus far entered the freshwater ecosystem inundated Great Lakes region.

In the case of steadily expanding abundant populations of the exotic invasive crustacean, the only viable means of limiting the ecological impact of the rapidly reproducing species is to attempt to curtail the number of aquatic ecosystems the species successfully invades by encouraging transient fisherman and recreational boaters to thoroughly “clean, drain, and dry” their watercraft, batt wells, fishing equipment, and trailers before towing their boat to a new lake.  For more information on the Michigan Clean Boats, Clean Water program, visit https://www.canr.msu.edu/clean_boats_clean_waters/ .