Lake Advocacy – It All Starts with You

How are lake protections implemented in your township and zoning conflicts resolved?
Do lake residents and officials partner well on behalf of your lake?
Securing strong lake protection can be a challenge.
I know. I learned the hard way.

Don’t get me wrong. Our township has done some terrific things to protect our 200-acre lake in southeast Michigan. A Lake District was included in the township’s Master Plan and a SAD (Special Assessment District) was voted in to manage invasive species. Keyhole protections were updated and a Board resolution opposing a public boat launch was passed. In 2017, a lake resident was even added to the Planning Commission.

The problem: Our lake residents were invited by township officials to provide input into a new Master Plan and Zoning Ordinance but only a few showed any interest. That was our first mistake. Lake residents were later caught by surprise when some parts of the new zoning ordinance did not reflect our lake’s needs. Changes have now been made but not without enormous lake resident effort.

LESSON #1: Lake advocacy starts and ends with YOU, the lake residents. Do not depend on officials to wholly represent your lake interests. Get involved – early and often.

For years, a neighbor preached the importance of lake residents attending township Planning Commission and Board meetings, “… so they know we’re watching and involved; that we care about their decisions affecting the lake; to be better educated about township government and to know our officials,” she would say. Oh, no, I thought. Not more meetings! Surely, we should be able to trust others to act in the best interests of our lake.

Not necessarily. Upon returning home the end of December, 2014, I opened the door to a 6-foot wall of wood. A fortress-like
structure neighbors had installed between our two, small waterfront lots was ominous – a 6-foot privacy fence without privacy. Our grade is higher. We can still see them; they can still see us. The fence was unlike any other approved fence on our lake. Surely our zoning ordinance doesn’t allow this, I thought.

It didn’t. A process error had led to the approval and three months later, the fence was ruled non-compliant. Months passed and a garage was added to move the front building line and make the fence compliant. Officials promised to fix the zoning ordinance for waterfront lot fences but that didn’t happen.

NOTE: I later learned that 4-foot, see-through fences on waterfront properties were the fence standard in the township’s previous ordinance – but not the new one. An oversight? An intentional change? I’ll never know, as that question was never answered.

LESSON #2: Study your zoning ordinance and how each section affects lake properties. Educate yourself! Even better, get lake residents on your Board, Planning Commission and committees.

It took a fence zoning issue to get my husband and me to Planning Commission and Board meetings (we are now regular attendees). We voiced our concerns and pleaded for help; repeatedly tried to resolve the problem in favor of view preservation and protecting the rural, hamlet character of our lake area. Michigan’s Denton Township, for example, limits all fences within 500 feet of a lake to 4-foot or less – Township of Denton, MI District Regulations. 310-21 Lakefront Residential District. F(2).

A Zoning Board of Appeals (ZBA) hearing remained our only option but once filed, there were new obstacles – multiple revisions required of our application; recommendations that we drop the appeal; told that we wouldn’t win; critical background materials not forwarded to ZBA members. Time and money being spent to fight when all we wanted was a fair hearing and to protect the lake.

LESSON #3: Build relationships with elected and appointed officials. Actively participate in Planning Commission and Board meetings. Learn how officials conduct business … BEFORE you have a problem.

As predicted, we lost the ZBA appeal. But that’s not the end of this story. I returned to the Planning Commission the next month and asked for a change to the waterfront property fence zoning – a return to the 4-foot see through standard as in the previous zoning ordinance. Unfortunately, no action. I then took the request directly to the Board. Lake resident support became critical and a few of us collected signed letters from lake residents. The letters stated opposition to large fences on waterfront properties and asked for greater lake zoning protections. Some residents wanted no fences allowed on waterfront lots; some didn’t want to get involved (fearing retribution on their future zoning requests); others said simply, “We don’t sign things.” The county states there
are about 138 homes/properties with lake access at Pleasant Lake. We delivered more than 100 letters to the Board.

LESSON #4: Don’t give up! Build a coalition of lake residents who will support your lake advocacy efforts. Find qualified Michigan zoning and planning experts to serve as your coaches.

Surely, it should now be easy to fix the fence zoning, I thought. It wasn’t. Some officials were unsure all the signatures were valid and wanted to hear directly from lake residents. They called a special meeting; then, a public hearing. A small unnamed opposition group emerged, so officials sought more and more “proof ” before recommending changing the waterfront fence zoning ordinance back to four feet, see through. I learned how quickly a vocal few can undermine the efforts of an active majority and how easy it is to blame us lake advocates as troublemakers.

Our persistence finally paid off. The Board intervened with the Planning Commission on behalf of lake residents. The fence change resolution at last made it to the Board, but not without one last surprise: In addition to limiting waterfront fences to 4-foot, see-through and no closer than 50 feet from the shoreline, a new lake zoning change was slipped in: Reduce setbacks from 50 feet to 25 feet! With regional, state, and national setback trends going in quite the opposite direction, we were shocked and once again had to call our lake resident coalition into action and the next Board meeting was packed. The Board approved the fence zoning
change but vetoed the setback change.

LESSON #5: Lake advocacy is not for the timid! Strengthen your lake association and long-term lake protection plans then stick with your strategy. Adapt as needed when obstacles are put before you. Don’t give up! Be persistent.

Did you know – the State of Michigan ranks dead LAST in the country for government ethics and transparency (http://www.freep.com/story/news/politics/2015/11/09/michiganranks-last-laws-ethics-transparency/75288210/)? No Board
of Ethics; no State Ombudsman; no place to appeal. In the midst of our conflict, our state representative suggested three
options: take the township to circuit court, elect/appoint new officials, and take concerns to the media.

We took our story to the media. Let the public know what was going on; the resistance faced; the unnecessary time and money spent fighting vs. working together toward the betterment of lake protections. Two small local newspapers showed interest in our lake issues and kept the topic in the public’s eye. Articles and letters were published. Reader after reader came forward to tell us their stories of past conflicts; to express appreciation for our efforts; to say they’re cheering for us. As a result, our lake resident coalition became more empowered, more outspoken, and more visible lake advocates.

Our lake association was also actively involved in a water protection conference held in late 2016 at our township hall. It was co-sponsored by Michigan State University, the Huron River Watershed Council, Washtenaw County, and other groups. The highly successful event attracted over 75 participants and included lake residents and township officials from as far as 200 miles away.

I’m proud of our improved lake protections but sad about the enormous effort and conflict required to get them. Our lake zoning challenge lasted more than two years and cost way too much time and money. At more than one heated meeting, I slipped my husband a note: We need to move! But after a good night’s sleep, I was back at it. Lake advocates are change agents and must do what is needed on behalf of our Michigan lakes. Someone must take the lead. Why not you? 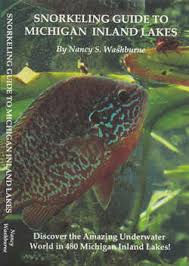 Inspired by the “beauty and excitement” observed while snorkeling in over a thousand Michigan inland lakes in a period extending from from 1992 to 1997, the book entitled Snorkeling Guide to Michigan Inland Lakes: Discover the Amazing Underwater World in 480 Michigan Inland Lakes! by author Nancy Washburne is a must have for veterans of the sport as well as for those preparing to enter the water outfitted with mask, fin, snorkel and underwater camera for the first time. For those that are comfortable in the water, Washburne points out that snorkeling is one of the “most therapeutic and energizing activities that the whole family can engage in” while also experiencing “so much color and a great variety of fish, large and small, along with the beautiful vegetation”. The book provides detailed information on the 480 inland lakes that Washburne found most interesting and colorful while snorkeling in over one thousand public access inland lakes in Michigan during a five year period in the 1990’s.

To view a video produced by author Nancy Washburne that displays the color and wonder to be found while snorkeling in many Michigan inland lake visit https://www.youtube.com/watch?v=p2MzhUh04cY.