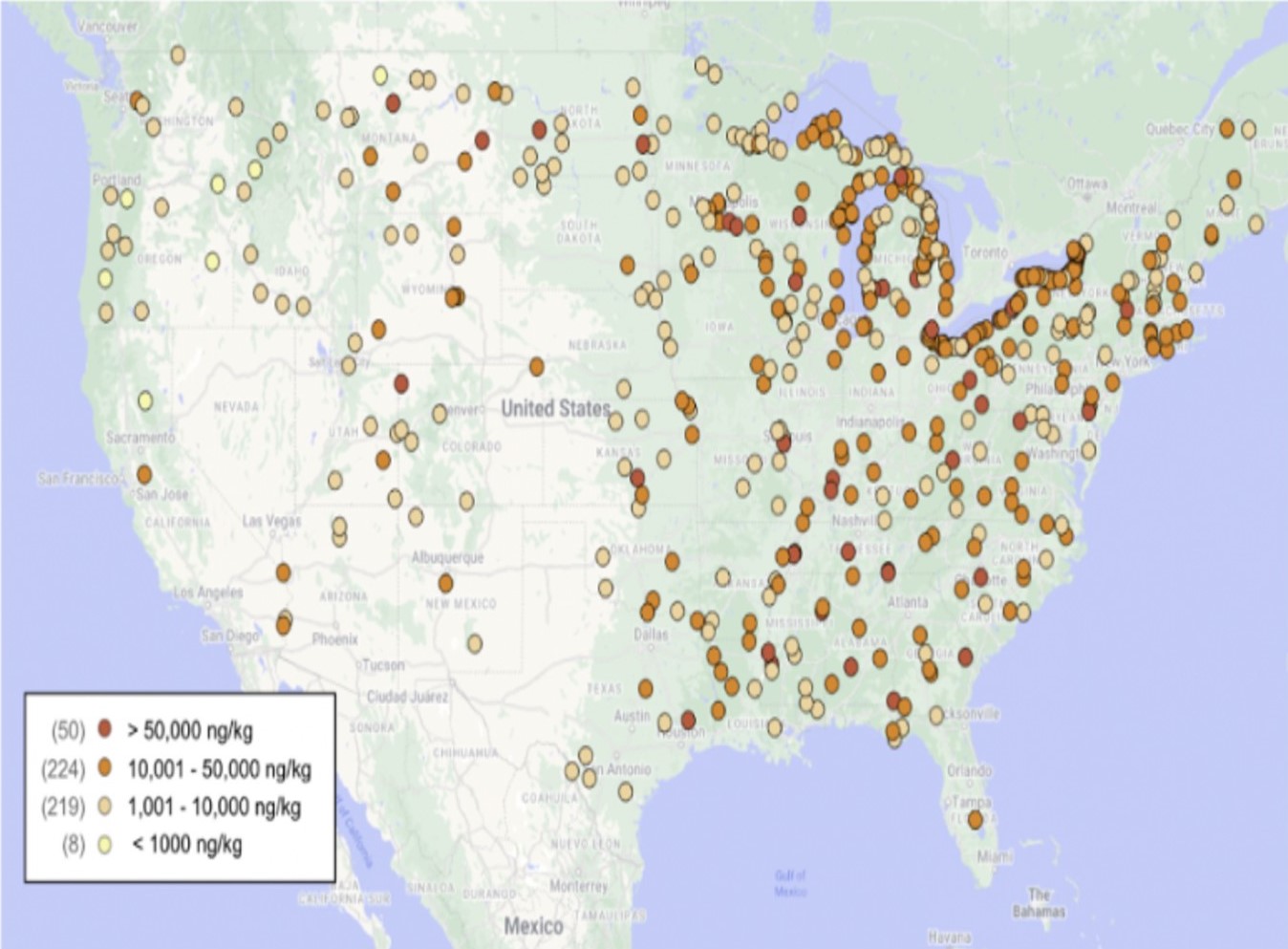 by Scott Brown, MWA E-Newsletter Editor and Board Director

Electronic and print media news articles focused on the harmful environmental impacts and enhanced risks to human health associated with a large group of odorless, invisible toxic chemicals referred to as PFAS seem to appear almost every day. Present in soil, sediment, groundwater, wastewater, food, drinking water, and within the waters of our lakes and streams, per-and polyfluoroalkyl substances (PFAS) are a large group of man-made chemicals that include both perfluorooctanoic acid (PFOA) and perfluorooctanesulfonic acid (PFOS) that were initially developed by Dupont in the 1940’s. Widely utilized by manufacturers, a few commonly occurring examples of products containing large concentrations of PFAS include firefighting foam, and a wide array of popular consumer products. These include, to cite just a few examples, heat-resistant non-stick cooking surfaces such as Teflon cooking pans, water proofing and fabric protection products, cosmetics, shaving cream, nail polish, food wrappers, takeout containers, carpet, leather, and pet food bags. It is also important to point out that PFAS are sometimes referred to as “forever chemicals” due to the fact that they tend to accumulate over time in the human body and do not break down easily due to their long half-life.

Even in relatively low concentrations, exposure to the vast suite of chemicals known as PFAS has been directly linked to significant increases in the risk of acquiring certain forms of cancer, or of suffering from reproductive and developmental problems, thyroid disease, high cholesterol, or ulcerative colitis. According to the Centers for Disease Control and Prevention (CDC), approximately 95% percent of the citizens of the United States currently have PFAS in their bodies. Moreover, due to the fact that PFAS is now so prevalent in groundwater, soil, and livestock feed, it is also regularly detected in blood samples extracted from milk cows, cattle, sheep, hogs, and other widely consumed sources of meat such as chicken and turkey. Of particular concern to the State of Michigan, and other states including Ohio, Pennsylvania, and New York that each have coastlines on Lake Erie and Lake Ontario, however, are the relatively large concentrations of PFAS that are being detected in samples of freshwater fish.

The just released results of a new study conducted by the Environmental Working Group (EWG), a non-profit organization dedicated to creating a healthier environment, strongly suggests that PFAS contamination of freshwater fish maybe of special concern to people who depend upon fishing out of economic necessity in the Detroit River, or within other heavily urbanized areas that exist on coast of Lake Erie and Lake Ontario where fish tissue samples detected higher than average levels of PFAS contamination. The study indicated that “widespread PFAS contamination of freshwater ﬁsh in surface waters in the U.S. is likely a signiﬁcant source of exposure to PFOS and potentially other perﬂuorinated compounds for all persons who consume freshwater ﬁsh, but especially for high frequency freshwater ﬁsh consumers.”  National testing of fish tissue completed by the United States Environment Protection Agency shows that while nearly all ﬁsh present in the rivers and streams of United States possess detectable levels of PFAS, the Great Lakes, and in particular certain areas of Lake Erie and Lake Ontario, are now known to host fish with the highest concentrations of PFAS in the nation. The Environmental Working Group study also suggests that due to the fact that self-caught ﬁsh are an important source of subsistence for many individuals living in heavily urbanized areas, fish consumption targeted PFAS advisories are likely to disproportionately affect people who are not likely to be able to afford to replace self-caught ﬁsh with commercial fishery sourced ﬁsh purchased from their local grocery store. The authors of the EWG study also provides a cautionary note which suggested that consuming a single serving of yellow perch caught in certain areas of Lake Erie, for example, equates to drinking a thirty-day supply of PFAS tainted water. The EWG sanctioned study, entitled “Locally caught freshwater ﬁsh across the United States are likely a signiﬁcant source of exposure to PFOS and other perﬂuorinated compounds” appeared in the January 2023 edition of the scientific publication entitled Environmental Research.

Providing a seemingly unlimited supply of high-quality freshwater and a viable means of navigating to the outside world via the St. Lawrence Seaway, the Laurentian Great Lakes region has served over the course of last century as the North American base for the automotive, steel, petroleum, and chemical industries, and is therefore particularly vulnerable to the human health and environmental impacts that have thus far been associated with PFAS. Even though PFAS is present in nearly every state, a review of the map which appear below indicates that Great Lakes region states, and particularly Michigan, possess an inordinate number of sites hosting high concentrations of PFAS.  As the map clearly suggests, states bordering the Great Lakes each face a significant economic, environmental, social, and logistical challenge in seeking to contain and prevent further contamination of immensely valuable freshwater ecosystems by the harmful chemicals.

In response to widespread PFAS contamination, the Michigan Department of Health and Human Services encourages people to follow the Eat Safe Fish Guides.  The annually updated guidelines provide readers with a detailed breakdown based on fish species, where it was caught, and which pollutant is the problem. The State of Michigan has also created a PFAS Action Response Team (MPART) which is approaching the increasingly widespread PFAS problem with a “unique, multi-agency proactive approach” for coordinating state resources that are being dedicated to addressing the complex problem. The State of Michigan also suggests that those who are especially concerned about their exposure to PFAS can visit the state’s Michigan PFAS Action Response Team (MPART) page for valuable resources and information on areas of the state where water is being tested and where sources of acute contamination are monitored and investigated. Information from MPART on health concerns can be found on their webpage 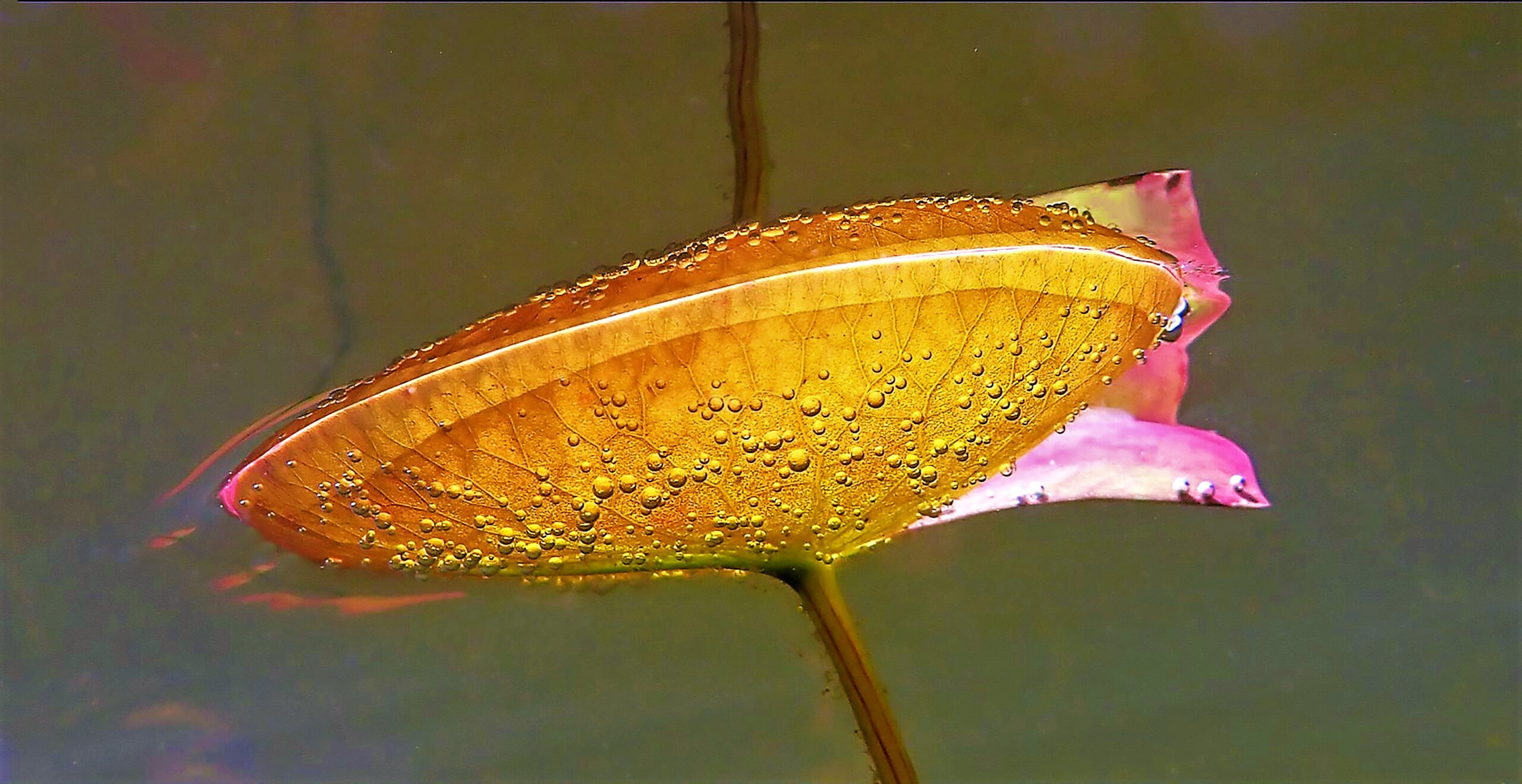 The Michigan Waterfront Alliance (MWA) Board is excited to share with you some information about an advocacy campaign for restoring funding to, and enhancing Section 314 of the Clean Water Act (CWA), formerly known as the Clean Lakes Program.

When the Clean Water Act (CWA) was enacted in 1972, Congress explicitly acknowledged the importance of healthy lakes in Section 314. This voluntary Clean Lakes Program provided funds to help assess the water quality of lakes in a state or tribal jurisdiction, conduct diagnostic feasibility studies to identify the causes of pollution in the lake, implement projects to mitigate the problems, and carry out post-restoration monitoring studies. The Clean Lakes Program awarded $145 million in grants through 1995. But Congress has appropriated no funds for the Clean Lakes Program since 1995, even though 45% of the nation’s lakes continue to be in poor condition as a result of nutrient enrichment and other stressors, according to the most recent National Lakes Assessment .

Another important part of the CWA is Section 319 Nonpoint Source Program that was established in the 1987 Amendments to the Act. Since 1990, the Environmental Protection Agency (EPA) has been providing financial support to states and tribes through Section 319 grants to implement their nonpoint source management programs.

Significant new funding needs to be allocated to support a coordinated effort to address the many threats to lake water quality and prevent further deterioration of existing healthy lakes. 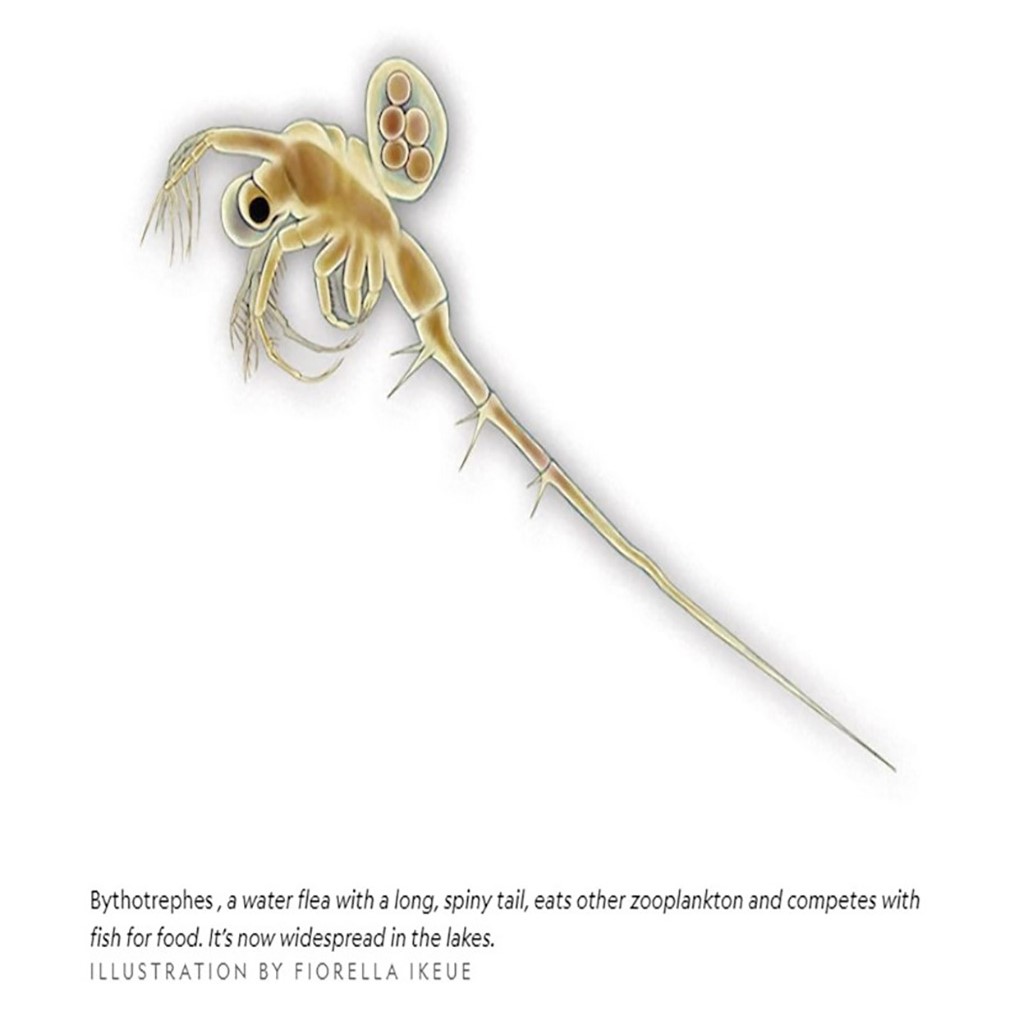 First observed in the waters of Lake Huron in the late fall of 1984, aquatic biologists suspect that exotic invasive spiny water flea (scientific name: Bythotrephes longimanus) entered the Laurentian Great Lakes region via the ballast water discharge of a commercial freighter that had entered the freshwater inundated North American continent after navigating from Europe. A native of the Ponto-Caspian Sea region of Eastern Europe and western Asia, the predatory zooplankton species commonly referred to as spiny water flea likely spread via currents, inter-lake ballast water transfers, and recreational boaters to Lake Ontario by September of 1985, to Lake Erie by October of 1985, to Lake Michigan by September of 1986, and to Lake Superior by August of 1987.

Characterized by a distinctive black eye spot, a single long spiny tail, and an opaque body that ranges from one quarter (.635 cm) to five eights (1.59 cm) of an inch in overall length, spiny water flea are capable of explosive rates of population growth due their inordinate capacity to reproduce asexually by cloning themselves in relatively warm waters that are present in late spring and summer, and by reproducing sexually in the cold waters of late fall by producing and fertilizing eggs that are capable of remaining viable for long periods of time due to their inherent resistance to freezing and drying.

The presence of exotic aquatic invasive spiny water flea represents a ‘clear and present’ danger to the freshwater ecosystems that they invade due to the fact that they make their living by aggressively preying upon often abundant and highly beneficial native zooplankton species such as Daphnia that serve as the primary food source for juvenile fish, and that help achieve and sustain clear water in most of our lakes by grazing upon unicellular green algae phytoplankton species that are generically referred to as diatoms. Aquatic biologists fear that declines in the abundance of Daphnia and other native zooplankton species that are heavily preyed upon by spiny water fleas will significantly alter the food web of the Great Lakes, and therefore reduce the number of young phytoplankton eating fish that are capable of surviving their highly vulnerable first year of life. Researchers have also observed that some valuable Great Lakes species such as chinook salmon, walleye, white bass, alewife, yellow perch, white perch, and lake whitefish often consume spiny water flea. It is not currently known, however, how nutritional the exotic spiny water flea is for fish, given the significant portion of the species overall biomass that is comprised of exoskeleton, and the namesake long spiny tail that are known to possess little or no value nutritional value.

The substantial threat posed to invaded freshwater ecosystems is amplified by the fact that spiny water flea deploy a highly effective survival strategy that allows them to avoid being preyed upon by migrating into deeper, cooler, light deprived waters during the day, and by returning to the upper layers of the water column to feed at night under the cover of darkness. The capacity of spiny water flea to disrupt the aquatic food webs that help sustain a myriad of fish species is also enhanced by the fact that many of the fish that inhabit our inland lakes such as bluegill and red eared sunfish are incapable of eating the highly invasive exotic zooplankton species due to their long spiny tails.

The telltale existence of the highly invasive exotic zooplankton species within a particular lake is usually initially detected by sport fisherman whose fishing rod eyelets become clogged with spiny water fleas, or downrigger cables that become inundated with the black eyed, spiny species.

In addition to becoming aware of the fact that this highly invasive exotic zooplankton species continues to spread from lake to lake in the Great Lakes region, recreational boaters and sport fisherman can help prevent the species from entering your favorite lake by remembering to ‘Clean – Drain – Dry’ before transporting their boat and trailer to a new lake.